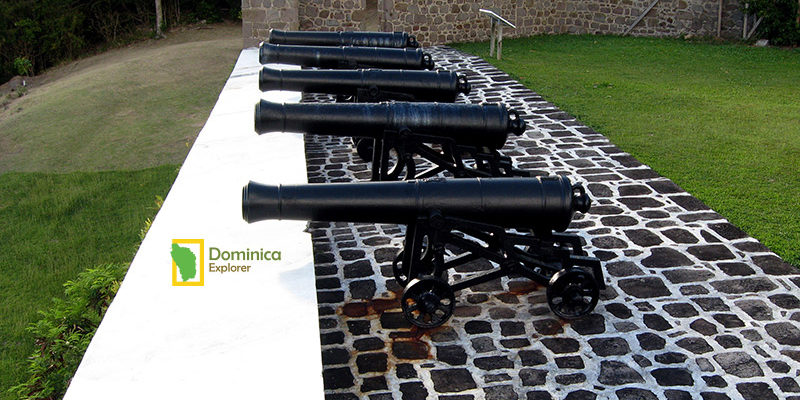 Once the site of the most impressive military installation in the West Indies, this 18th Century garrison (Fort Shirley also called Cabrits) was built to protect the north area of Dominica by the British and French respectively. After years of abandonment the restoration of the Cabrits began in 1989 by Dr. Lennox Honychurch.

Cabrits is situated to the west of two famous mountain ranges, Morne Aux Diables to the North and Morne Diablotin to the South (named after the Diablotin bird that once found a habitation in the heights of these mountains). It was built on the remains of two volcanic craters on the North West coast of Dominica, overlooking Douglas Bay to the north and Prince Rupert’s Bay in the South.

The name Cabrits derives from the Spanish, French and Portuguese name for goat, an animal which has been indigenous to the peninsula. Sailors coming to the island left goats to run wild so that when they revisit the island there will be fresh meat available for food.

The Cabrits was a strategic post for defending Dominica. Although the Cabrits itself never saw a fight, it served well as a fortress and lookout point. With the end of the hostility between the French and the British, Fort Shirley became obsolete and was abandoned in 1854.

The Battle of the Saints was seen in full view from the vantage point of Cabrits. Fort Shirley was the scene for the famous revolt of the 8th West Indian Regiment in 1802.

Cabrits became a national park in 1986.

The Cabrits National Park is a beautiful and open-air museum enjoyable to all, particularly nature lovers, those wanting a romantic getaway, historians, and those who want to enjoy beautiful scenery.

A tour by foot of the Cabrits is very easy and is recommended for visitors of all ages. The walk up to Fort Shirley from the base of Cabrits is about 10 minutes. Additionally, there are two fort installations on the very top of the West end and East end of Cabrits that would require you to walk at least 1 to 1.5 hours up the trails. However visitors are to exercise extreme caution in those areas.

Furthermore the calm, crystal blue coastal water near the Cabrits National Park is a great place for scuba diving, wreck diving and snorkeling. Beautiful and rare species of fish, attractive coral reefs and bubbling hot streams are all part of the exhilarating sea life near the Cabrits National Park. The melodious sound of this alluring Caribbean Sea as its waves gently crash against the shoreline warmly calls the visitors to bask in this basin of blue on a warm tropical day.