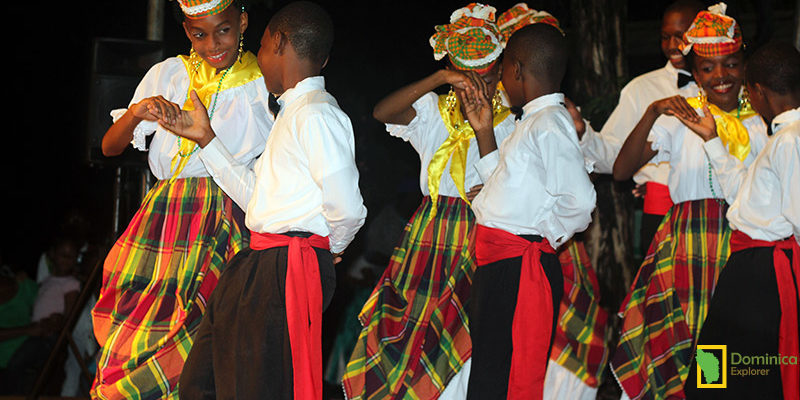 The Commonwealth of Dominica celebrates Independence Season every year as recognition of its rich creole culture.  During this season, activities are held around the island to help remind Dominicans of their prestige cultural heritage and why it should be preserved. The activities involve national ceremonies, exhibitions, sporting events, creole pageants, cultural extravaganzas, festivals, competitions, and more. It showcases our local creole uniqueness in form of food, clothes, dance, drama, song and instrumental. The main activities are as follows:

National Day of Prayer is a day set aside for prayer and thanksgiving for the nation. It is the event used to open the Independence Season. On that day, all churches are required to invite their congregation to dress in traditional wear to attend mass as a form of patriotism.

Official Opening Ceremony is held too mark the official opening of the Independence Season.  Selected cultural groups are expected to perform and the participants of the various pageants have to make an appearance to introduce themselves to the public.

Dominica History Week which is termed Simenn Listwe Domnik is a time when the numerous districts, north, south, east and west have sporting events amongst the different schools. These activities help mobilize young people and to foster a sense of integration.

Madame Wob Dwiyet is a pageant for grown women portraying our national wear. It places emphasis on the “Wob Dwiyet” which promotes the dress in its authentic form sewn with madras and/or flowered fabric.

Ti Matador gives young girls between the ages of 7-11 an opportunity to showcase their talent and model in the JIP costume. Like the Madame Wob Dwiyet, the aim is to promote creole wear and creole language.

National Wob Dwiyet has the same objective as Madame Wob Dwiyet however, more prestigious. The participants are young women between the ages of 18 and 25 who vie for the title “Miss Wob Dwiyet.”

Creole Symposium is part of creole week of activities. It brings together researchers, educators, cultural entrepreneurs, policy makers, artistes and support institutions from creole communities in the region. They share experiences, identify opportunities and challenges and discuss strategies for a way forward. The idea is to basically strengthen linkages and form networks among countries who share creole language and culture.

Heritage Day (Jounen Hewitage) commemorates the creole culture and is held in a different community each year. It starts off creole week on the Sunday preceding Creole Day.  A typical Heritage Day includes a church service, agricultural, industrial and cultural exhibition followed by a cultural gala. It features and awards a Cultural Elder who has contributed towards socio-cultural development.

Creole in the Park was initiated and funded by LIME Dominica Ltd. It comprises of four days of activities with performances by local artistes, primary schools, cultural groups, regional artistes and more. It is a fun day in the park where persons enjoy our traditional culture in the form of arts, food and clothing. This event leads towards World Creole Music Festival (WCMF).

Creole Day marks one of the special features of the Independence Celebrations. On Creole Day Dominicans promote the creole language, cuisine, music and clothing. It is always the last Friday in October.

World Creole Music Festival (WCMF) was initiated to attract more visitors to Dominica during the Independence Season and to promote Dominica’s musical industries. Music of the creole world such as Africa, Haiti, Guadeloupe and Martinique are some of the main features of the show. WCMF has grown to be one of the major events in the Caribbean.

National Youth Rally is when schoolchildren from around the island amassed for a whole day. The programme comprises of speeches by government officials, youth and performances by children. Awards are presented to young persons who have contributed to youth, social and/or community development.

National Day Parade signifies the official celebration of Independence. This is where uniformed groups such as scouts, schools, policemen, cadets and firemen etc marches in the stadium to address the nation. The President of Dominica usually receives salute on this day. Persons who have made outstanding contributions to Dominica are also honoured at this event.

National Cultural Gala is the climax of the traditional artistic cultural presentations. It is also Independence Day. Prior to this day competitions are held at districts then national level and the winners of each traditional dance/performance are chosen to perform at the cultural gala.

National Community Day of Service is the last event of the cultural season. This is a time for volunteerism (Koudmen) of the people in their respective communities. They come out to work on a single project that is usually funded by the Government. It marks their contributions, and they are rewarded with lunch for participation.