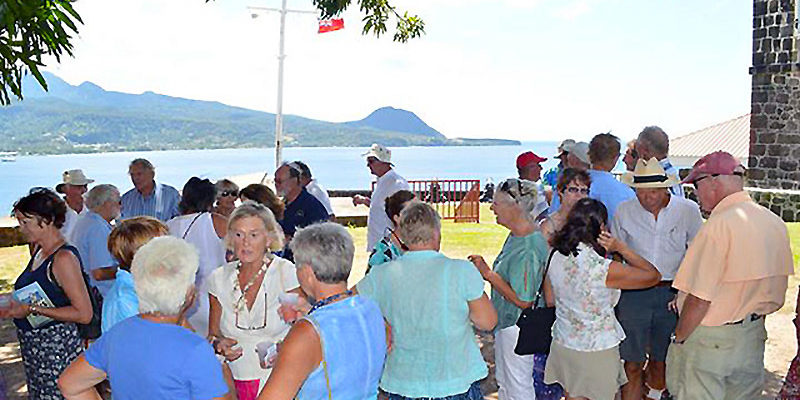 Fifty-five members of the international yachting group, Ocean Cruising Club, gathered at Fort Shirley from around the world to celebrate their sixtieth anniversary last Thursday. They sailed into Prince Rupert’s Bay during the week to get together at Fort Shirley, Cabrits National Park, where they had their anniversary lunch. While here, they visited a number of sites on the island. Representatives came from the United Kingdom, United States, Australia, South Africa and New Zealand.

Commodore Humphrey Barton of the UK founded the Ocean Cruising Club in 1954 and today it has some 2000 members. The qualification for membership is that a yachtsman or woman must have sailed 1000 miles non-stop in a boat less than 75 feet in length. Vice Commodore Peter Whatley led the group’s visit to Dominica.

Dr. Lennox Honychurch invited them to have their anniversary meeting here when some members visited last year. He gave them a talk on historic Prince Rupert’s Bay and all of the famous sailors who had used the harbour, and events that had occurred here. Portsmouth caterers Indian River Cuisine provided the lunch, with a menu of local dishes. PAYS, Portsmouth Association of Yacht Services and Security laid on hospitality and arrangements.
Dr. Honychurch noted that events such as this are very important for getting the word out there to build up Portsmouth as a popular yachting destination. He said that the Fort Shirley Hostel and a Scuba Dive and Marine Educational Centre would be opened by July and there will be a sailing regatta in May as well as the Jazz ‘n Creole in June.